Members of Wyre Archaeology Dig Planning team decided to investigate the "supposed" route of the Danes Pad on a cold day in early March. Various observations and photographs were taken. Using the premise of "start with what's known and move to the unknown" the closest place to Kirkham that could be a possible dig site would be near Westby reservoir. The route shown on OS maps runs parallel to track to the reservoir. 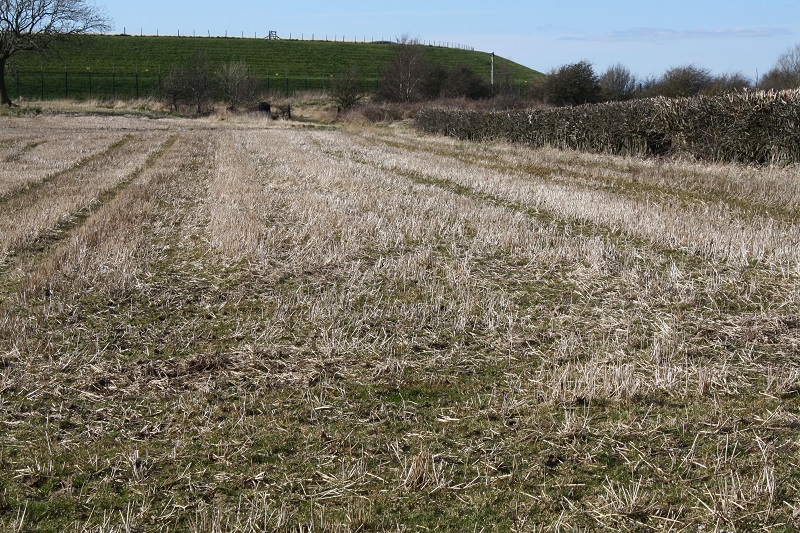 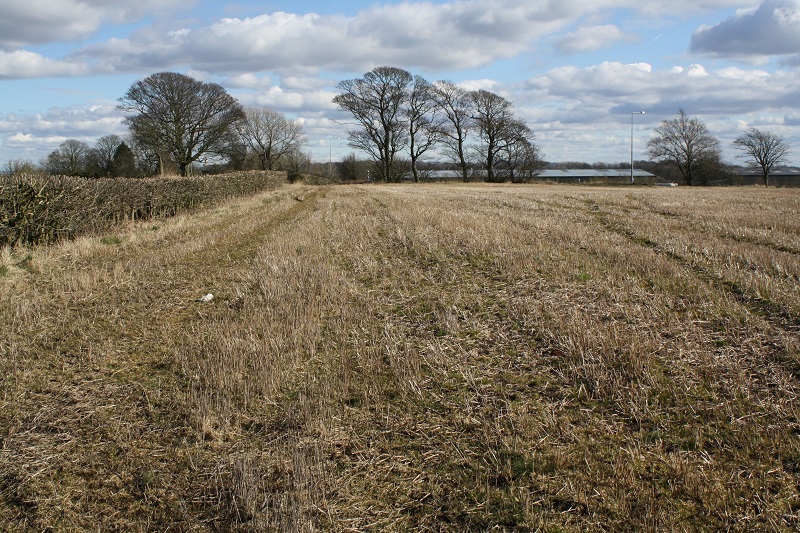 With the eyes of faith there could be a slight rise in the ground but it is a site that has been ploughed for centuries. On the positive side there is a deep gulley next to the hedge. Further investigation (possibly with a probe) is needed. There was a thought that it might have been more sensible for a road to take the higher ground. .

The original OS 10000 series shows the path going through the mill - which is now in the centre of the reservoir. Unfortunately, at the moment, we have no Tithe map image for the area. 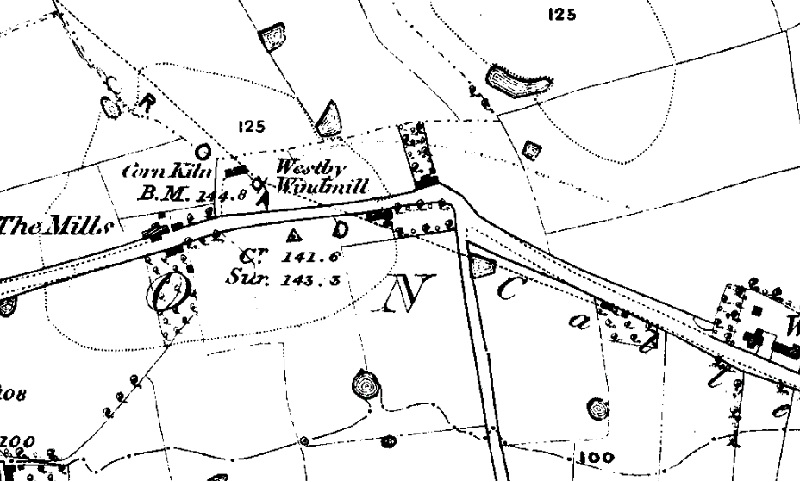 The modern view is below. By looking at Lancashire Mario Maps you can usefully merge the old and the new maps together. 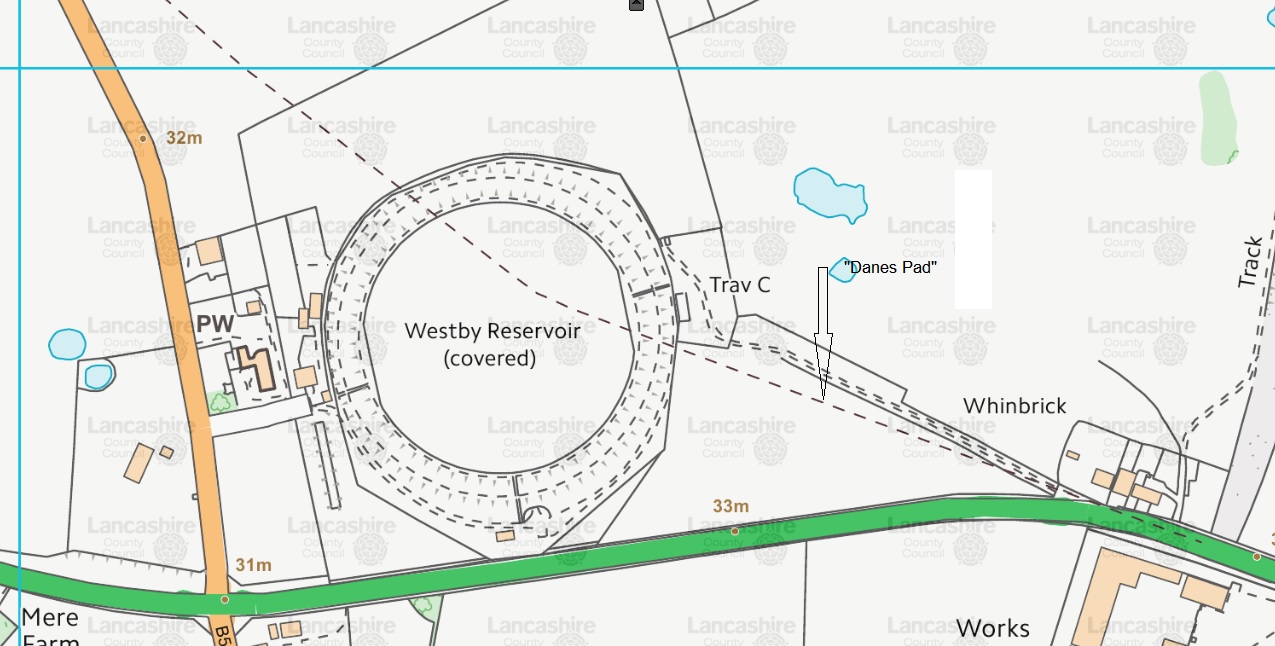 In the above map, the "Danes Pad" route moves off to the top-left - towards Great Plumpton.

Thornber writing in 1850 is dubious about seeing any sign of the agger.

"We are not now far from Westby Mill Hill. Here Mr Just fancied that he distinguished traces of it, but Mr Hall, sent afterwards with me over the line for the last time, would not attest them, though an old man, named Segar, declared that he had ploughed through it many times and oft. But here commences the gravel with which the road is made to the Wyre, and the nature of the ground is gravelly, and the signs of the agger doubtful, I agree with Mr Hall; yet that it abutted at this high hill the can be no doubt."

After this they went off to Weeton.

The following photo is taken looking back towards the reservoir. This field might be a good place for a field walk. 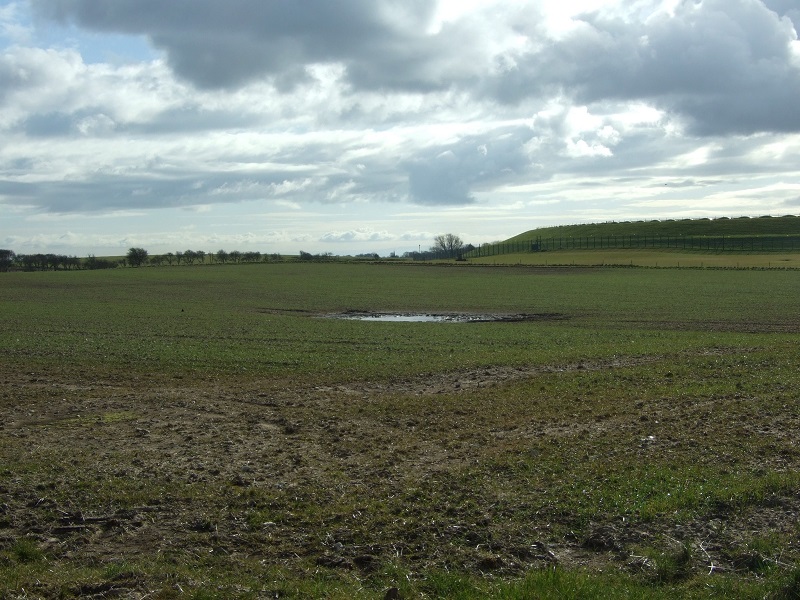 Turning around through 180 degrees the view towards Great Plumpton is shown. 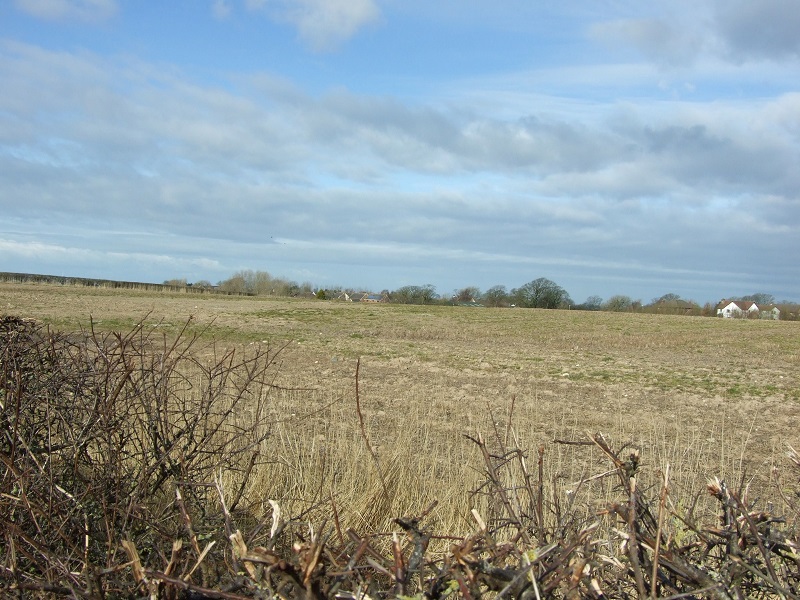 On passing through Great Plumpton, the "Danes Pad" re-crosses the road and goes over a small hillock. Looking back towards Great Plumpton doesn't reveal any sign of the "pad". 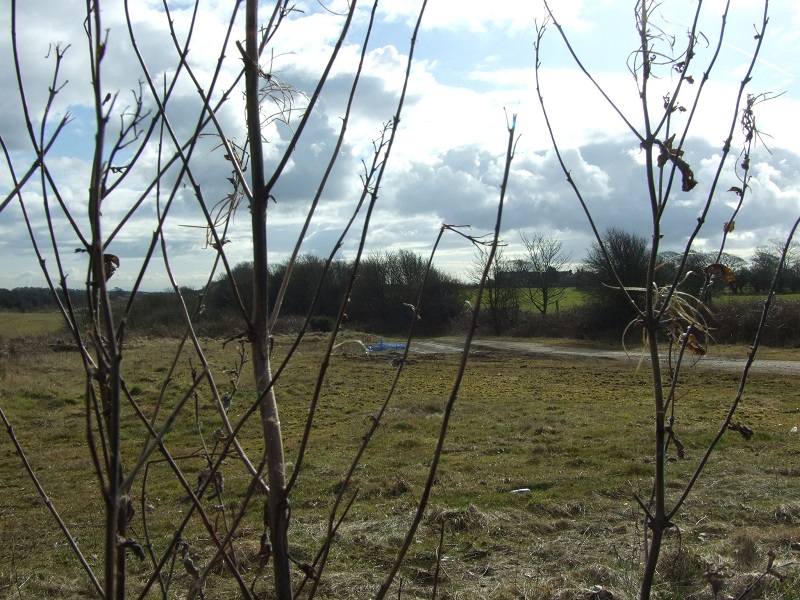 When the "pad" crosses Weeton Moss it goes through very low ground. Even now the land floods. 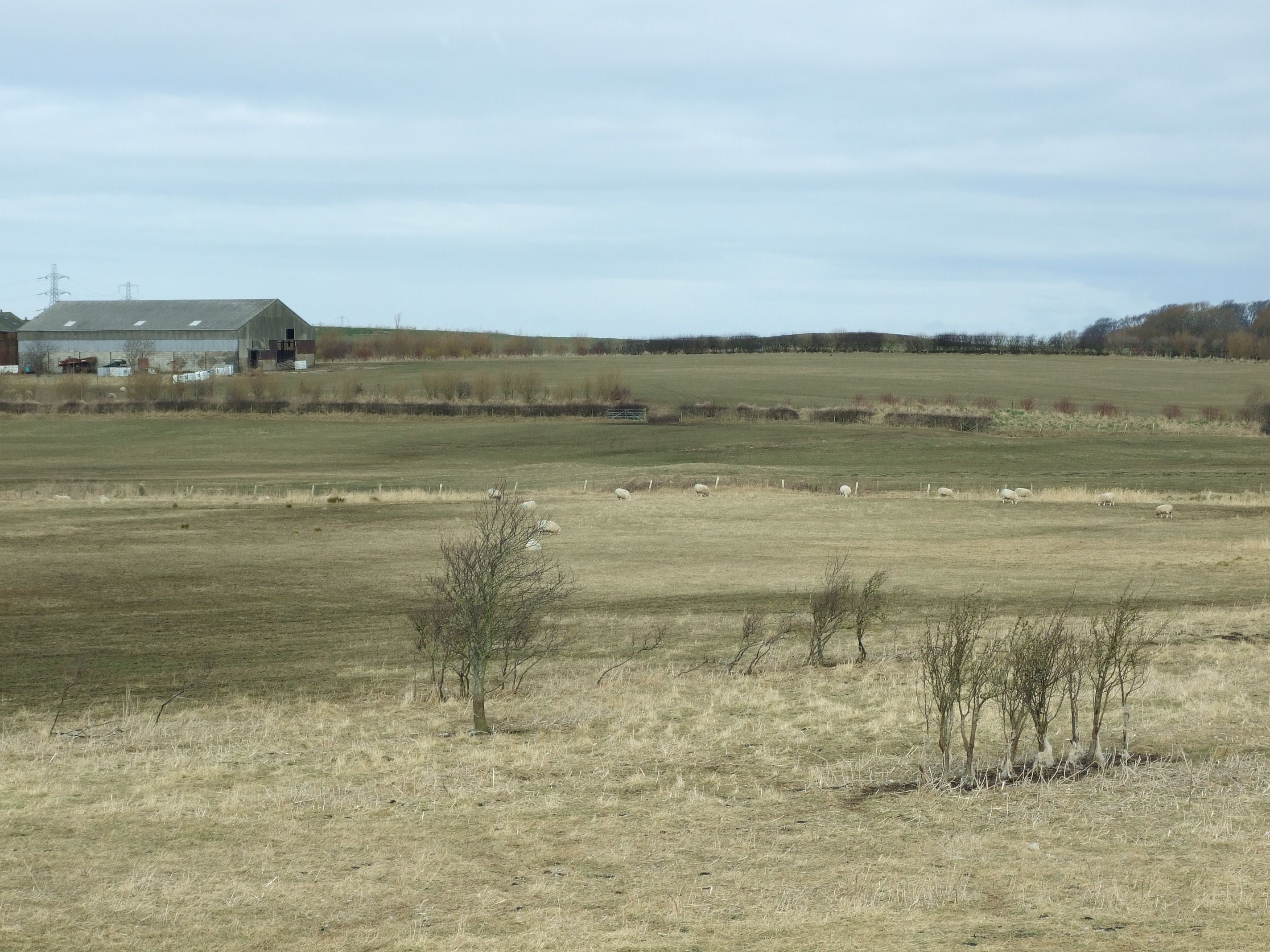 On the OS maps the "pad" ends at Puddle House Farm. The first photo looks towards the farm; the second looking south. 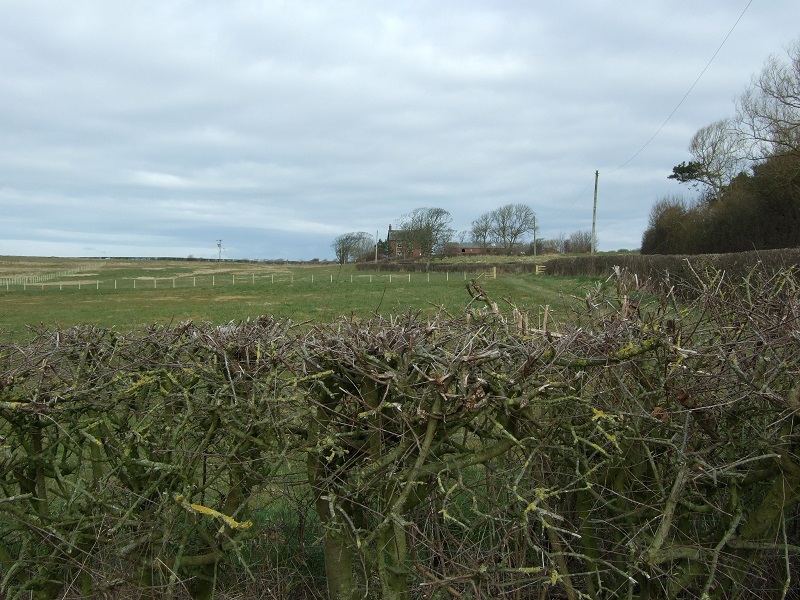 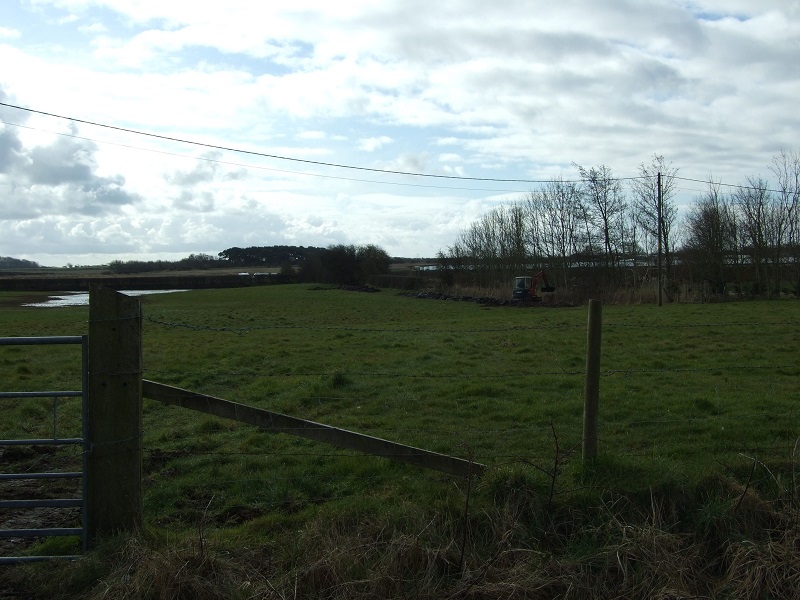 An archaeological investigation took place in 2010 following a planning application for an extension to a golf course in Staining. The route of the Dane's Pad shown on OS maps appeared to cross the area planned for development. The section involved covers the green for the 6th hole or, more likely, the tee for the 7th hole. 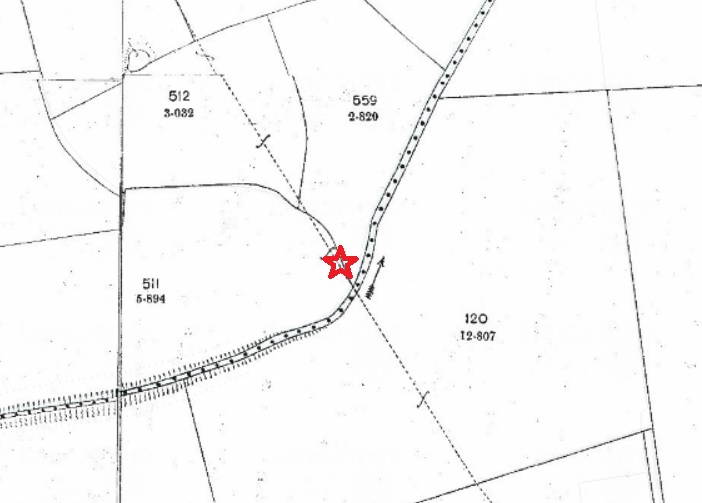 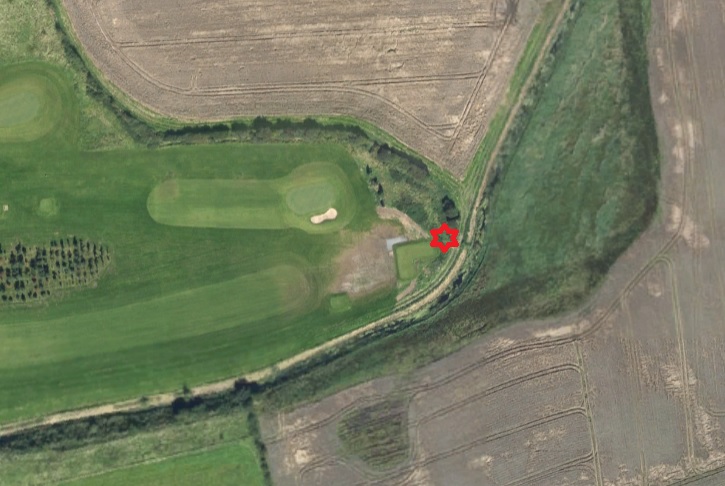 The full report can be found here. The pertinent section is as follows:-

Although the results of both the trenching and the metal-detecting survey in the vicinity of this feature were negative, the results of the intrusive investigation bear some consideration. Certainly, no conventional ditch-flanked mounded clay and stone agger was identified. However, the thick peat deposits here might have dictated the form of the Roman road across such a point: a dense agger built directly onto the moss surface would be liable to rapid subsidence, whilst road-side ditches would have little value in an already waterlogged setting. As such, it might be expected that the road would be carried across the mire on a bed of horizontal (corduroy) timbers, the survival of which would have depended upon their continued waterlogging. It is likely that the road surface would have been built up of clay and stone on top of the timbers, but, following post-medieval drainage, the resultant decomposition of the now desiccated underlying timbers, and subsequent plough damage, this horizon is likely to have been dispersed quite rapidly. Certainly, as observed by the walkover survey (OA North 2006), the topsoil in Trench 1 was observed to be much stonier than within Trenches 2 or 3, and it is difficult to imagine all these pebbles deriving from the peat. Within this context, field boundary 102 is of interest, particularly as over 60% of its make-up was of sub-rounded pebbles, whilst its alignment at the point of investigation matches that of Dane’s Pad. One is thus left with three hypotheses regarding the Roman Road:

Looking with a more sceptical eye, there are another couple of other possibilities:-

4. What was taken to be a Roman road in the vicinity of Staining and Weeton Moss in the 19th century had been a post-medieval road across Weeton Moss.
5. The "road" across the main dyke, or the stream that predated it, might have been a dam that enabled the water mill at Great Marton to operate.

With regard to item 5, a glance at a geological map shows that Marton Mere naturally drains to the east. However, it is known that it drove a water mill near present Rectory Road at Great Marton, Blackpool, until the Mere was partially drained in the 1730s and 40s. That was done by the scouring out the main dyke by the Jollys of Mythop, who also levied a toll on Chain Lane (named after the chain across the road) in the vicinity of the western corner of the golf course. It could also be that there was no Roman Road. More digging is needed to resolve this matter.

Since writing this article more evidence against any form of Roman Road between Kirkham and the River Wyre has come to light - in more ways than one. LIDAR has been used for a number of years by professional archaeologists but now the Environment Agency has released their data free of charge. One of the most knowledgeable "experts" on Roman Roads in Lancashire, David Ratledge, has examined all of the LIDAR images for the Fylde and concluded that there is no sign of it. Even with intensive farming some residual sign should have been left behind.