The "authority" for the Singleton Thorp story is Peter Whittle’s book “Marina, an historical and descriptive account of Southport, Lytham and Blackpool” published in 1831. He wrote:-

“1554. During the days of Mary Queen of England, a sudden irruption of the sea took place at Rossal Grange, — the sea washed in a whole village, called Singleton Thorp. The inhabitants were obliged to flee from the ancient spot, and erected their tents at the place called Singleton to this day”.- Dodsworth.

In the next paragraph Whittle stated: ­

In the year 1792 at low water mark, a number of trunks of trees lay in various directions upon the sands of the sea, which proved that there had been a village near Rossal. The inhabitants it is said fled - when the degradations of their property and homes took place, through the incursions of the tide - and planted themselves as a kind of colony, where Singleton village now is.”

In 1893, A. Halstead, editor of the Blackpool Times, led an expedition to search for Singleton Thorp and published a pamphlet describing its findings. For clues to where they were looking, here are excerpts from it.

“But what about Singleton Thorp? As we mentioned in our article our attention was first directed to it by Mr. Chew, of Albert road, who told us he had, some five years ago, noticed the signs of the buried forest at a low tide.

“We suggested another expedition to see if anything was still to be noticed. On that fine September afternoon we have before mentioned, and with one of the lowest tides of the year, we soon found evidence that we were walking over a buried forest—the site of the old village of Singleton Thorp—destroyed by an irruption of the sea in 1555, or 1588, probably the former date is correct. We saw enough to lead us, like Oliver Twist, to “ask for more.” Accordingly a small party of adventurous spirits, among whom was a well-known Town Councillor, hired a convey­ance, took spades, pickaxes, and other implements, bent on discovery of some good evidence that a village had existed there. We began operations at a point nearly opposite the hulking which slopes to the sea about half a mile from Rossall, and about four miles north of Uncle Tom’s Cabin. We could trace the buried forest in the way of fallen trees with their branches, and even their twigs and leaves, with mosses, ferns, etc., for about a mile along the shore at low water mark, and about half a mile inland. The nearer the sea and the more we saw.

“But our explorations revealed more than the mere forest and field remains. Evidences of the foundations of houses were not wanting. Our attention was first directed to what looked like a log tree. Closer notice revealed that it was quite different in shape from the other trees half buried in the sand. Digging and shovelling the sand from it laid it all bare, and we found it to be a straight and square piece of timber, about 17ft. long, and 13in. square breadth. There were the marks of other pieces of timber being fastened to it. One member of the party suddenly became full of reminiscences of a famous wreck near this place some 40 years ago, and was confident this piece of timber was a remnant of this wreck, but he abandoned this view as soon as the whole log was uncovered. It was, as plain as could be, the rafter of a large room of a house. This was confirmed by the fact that at an angle of 45? we traced the foundations of what was evidently the wall of a house. There was a large trench, with rough lime mixed with large cobble-stones near the bottom of the trench, the stones getting smaller towards the top of the trench. There was no mistaking this rubble-wall foundation. The course of it was in a straight line; it measured about 22ft. in length, though we could not find a clear and unmistakable finish to it at one end, though we could at the seaward end, and the angle of the wall where it joined another was clearly visible. Besides, the clay on each side of the wall was evident enough. There was no antecedent improbability about the matter. That there was a cottage there is admitted on all sides. Therefore, there is every reason to suppose that some remains of the buried village would be found, if a sufficient opportunity presented itself. When Mr. J. Chew told the writer of his visit to the spot five years ago, and of what he had noticed there, the expedition was organised with the above interesting result. We found in another place, about 150 yards from the fallen rafter, the same evidence of some sort of building. The rubble foundation, and the coarse lime and pebble mixture upon it was plainly visible; but it was too near the waves to follow it to the end. That we were on the site of the ruined and wave-swept village, there could be no doubt. Wherever we dug our spades we came upon the forest growths that we have described — not exactly as peat, but the peat in process of its formation.”

Some of our members chose to investigate this site at low tide on the 9th April, 2016.  The various sightings mentioned above fail to pinpoint the exact placing of Singleton Thorpe so the group, starting just south of Rossall school, split into two; one walking approximately 1 mile north of Rossall and the other approximately 1/3rd of a mile south.  The southern group came across a number of wood and stone features. 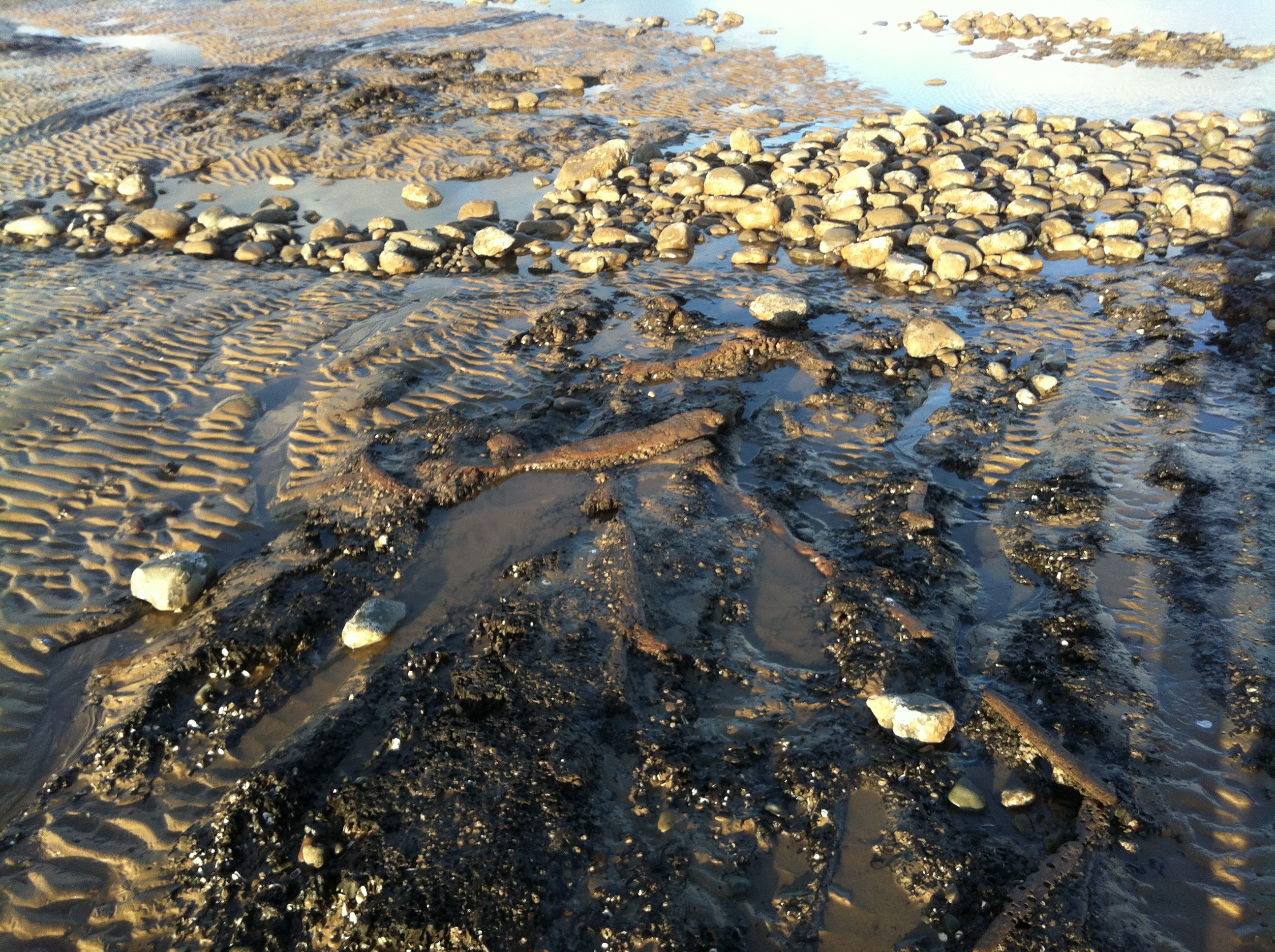 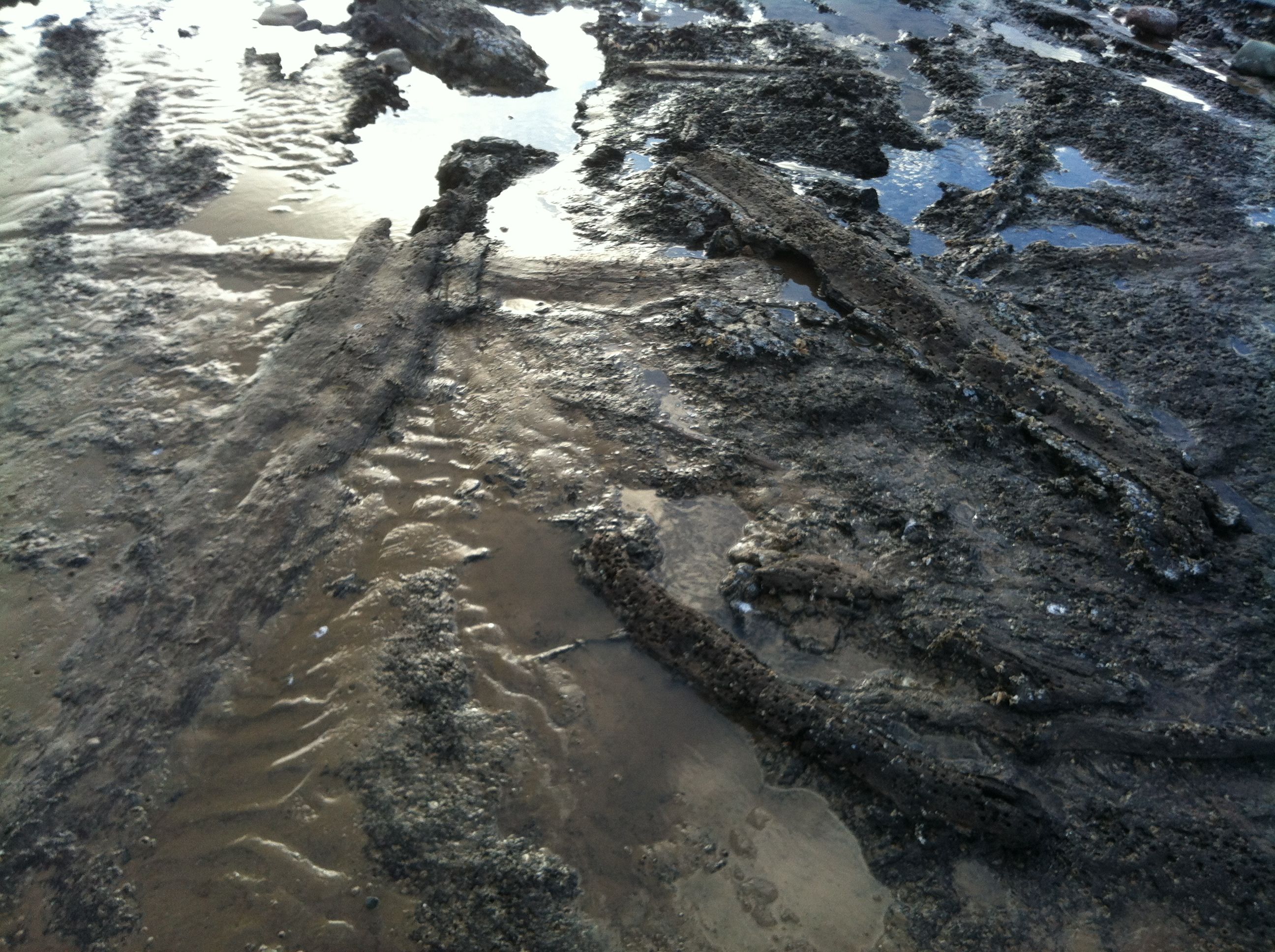 A discussion on the discoveries took place at our May meeting but without any real consensus.  Another visit to the site is required.

Another visit, by the webmaster, took place on the 22nd March 2018.  The  above site was revisited and none of the above features remained.  The planks had disappeared.  The obvious answer would be that they had little to do with the "putative" Singleton Thorpe and, more likely, debris from a more modern situation.

The most interesting feature of the latest visit appears in the following image:-