Bourne Hill in Thornton has been the focus of investigation by the Wyre Archaeology Group since 2005. The hill, now dissected by Fleetwood Road, was the site of the Bourne Hall farmstead which was finally demolished in the late 20th Century but whose origins certainly may be traced to at least the later Middle Ages. Members of Wyre Archaeology Group (WAG), however, suspected that the hill may have been the site of settlement in the Early Mediaeval period or possibly during the Iron Age 2000 years ago. Over the past 7 years WAG has carried out periodic excavations on the summit of the hill attempting to locate evidence of settlement and to identify what period in history or prehistory it may date from. 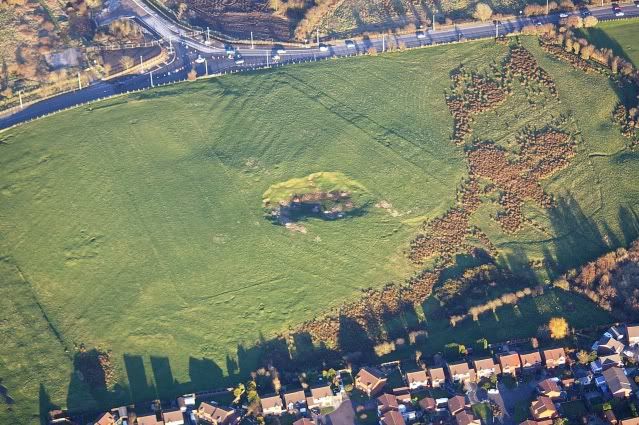 There are several reasons for believing that the hill contains some interesting archaeology. The fact that it is the only "hill" in the area and would have had an excellent view out over the Wyre estuary being the main ones. Up until comparatively recent times the majority of the land nearby would have been all bog so, if there is going to be habitation, it should have been here. From the aerial photograph (shown to the left) you can see a number of potential features. Probably the first to attract our attention was the long rectangle towards the centre left of the photo but you can also see the failure of the medieval plough lines to encroach into the rectangle - implying post medieval. Also, on one of our digs, modern barbed-wire was found following the line of the rectangle. In the bottom-right of the photo (just emerging from the shadows) can be found a series of deep gulleys and built-up sections. One possible explanation was that this was the entrance to an Iron-age fort. One the right-hand edge of the photo an oval feature can be made out. Definitely man-made and out of place in the landscape. A small trench was cut into this on one of the "Big Digs" a couple of years ago but nothing of interest was found. Paths leading into the site have been investigated and a mixture of split stones and old brick have been found.

We are hoping to investigate the site of the original Burn Hall which was situated on the top left of the photo. Records go back at least to the late 17th Century but a drawing by William Latham produced in 1817 shows brickwork that looks suspiciously Tudor (see the photograph section of the resources.) It is a pity that Wyre Archaeology wasn't in existence in the 1970's when the old hall was pulled down.

Although a number of interesting features have been revealed in the underlying compacted sand that makes up the summit, finds in terms of artefacts have been few although intriguing. Some possible Romano-British potsherds and what appears to be a fragment of Roman military cookware (mortarium) are the most significant so far, but there is an almost total absence of metal finds other than those relating to modern agricultural industry. WAG Secretary David Hampson explained, “In archaeological terms ancient sites in the North West of England are known for the comparative absence of artefacts, so this lack doesn’t surprise us, although of course we are ever hopeful to find something that could give a date to the site.”

Iron Age roundhouses were discovered quite recently, only a few miles away at Poulton and, at that time, about 2,000 years ago, Bourne Hill would have been one of the few areas of dry land in the low-lying and probably marshy Wyre peninsula. It’s likely too that the river was a major communication and trade route for people of the area, as well as providing easy access for invading Romans and, until relatively modern times, the River Wyre would have reached to the bottom of Bourne Hill.

The hill is one of a group of drumlins – round topped low hills left behind when the glaciers retreated at the end of the last Ice Age about 12,000 to 14,000 years ago. On top of the boulder clay is a layer of sand which, due to weathering and chemical changes, has become compacted and quite hard. WAG’s diggers have excavated down to this hard surface and have exposed a significant number of what appear to be stake holes that make up a circular feature. It may be that this represents a cattle pen but equally it can’t be ruled out that this may be the skeleton of a dwelling. There are other features in this surface such as gullies, strange moulded shapes and what appear to be deliberately-positioned groups of stones and pebbles that are difficult to explain, as are small areas where the surface appears to have been exposed to high temperatures.

Overall the site is an enigma.

On the first day of the "Big Dig" more possible postholes/stakeholes were uncovered but, possibly more important, was the discovery of a piece of knapped flint. It was complete with percussion lines. In the absence of any pre-Roman pottery this is possibly the first undisputed sign of Neolithic activity. When the flint was examined by Stuart Noon (the local PAS officer) it was dated to early Bronze Age.

On the 8th October, 2013, a small group of Wyre Archaeology members opened up a couple 1m2 test pits on Bourne Hill. These were situated on the lee side of the hill - closer to the road. The intention of this was to investigate the possibility of habitation on a more sheltered side of the hill. Amongst the more interesting finds was a small piece of pottery which looked very similar to other pottery which had been dated to Iron Age.

Also, just below the modern plough level, an abundance of brick was uncovered. The majority of this was modern but there was also a crude brick which looked suspiciously Tudor. Our present thinking was that this probably may be the result of the destruction of Bourne Hall Farm in the early 1970's.

To see the photo in detail, click on the image.

Other finds include small pieces of chipped flint (which is not natural to the area), a small piece of clay pipe (probably Victorian). The finds will, in the fullness of time, be examined by the PAS finds advisor. There is still a debate within the society about the usefulness of test pits in this area. If the finances allow a detailed geophysical scan would provide a more focused dig pattern.

The first BIG DIG of 2014 took place over the weekend of 27th July to 1 August and was preceded by a Resistivity Survey conducted by colleagues from Wigan Archaeological Society on the leeward side of the hill. This enabled us to target certain 'hot spots' that appeared to indicate possible archaeological features. Another specific target of our investigation was 'Ken's Anomaly', a linear feature that had showed up on a geophys survey carried out by UCLAN a few years ago.

A number of trenches were opened but, apart from a couple of horse shoes, no artefacts or archaeological features were identified. Excavation of 'Ken's Anomaly' also proved fruitless as it appeared to be a natural geological feature. This seemed to put an end to our speculation that this part of the hill might have been the site of early habitation. We therefore turned our attention back to the summit and the site of our circular feature where we had undertaken much earlier investigation, with the aim of excavating previously untouched areas. The number of volunteers taking part allowed us to open two large trenches but, once again, no archaeological features were exposed. We therefore came to the conclusion that, although previous finds did hint at human activity on the hill from prehistoric through to late mediaeval times, there was no convincing evidence of habitation.

We do still have a sneaking suspicion however that an Iron Age settlement was nearby - we just haven't found it yet!