Wyre Archaeology were invited by Broughton Parish Council to investigate the origins of the local pinfold.  A grade II listed building, very little information regarding the construction or the internal structure was available.  We were called in to fill in the gaps in this knowledge.

After an initial site visit it was decided to perform a geo-physical survey.  Our colleagues in Wigan Archaeology assisted in this process. 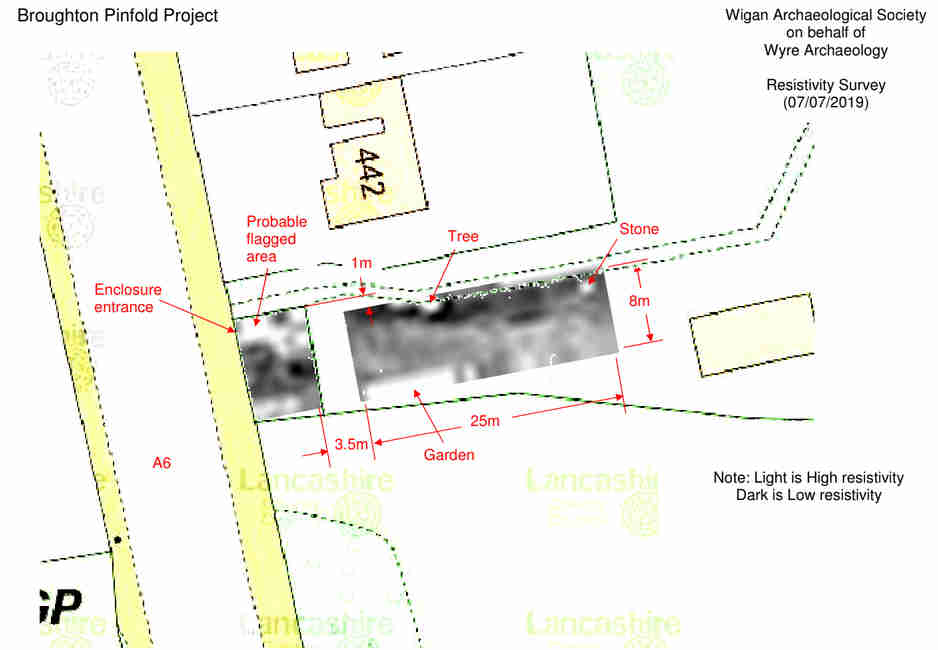 From the survey it was obvious that the natural had been covered over with an artificial surface - at least in some of the areas.   Two areas were investigated; A (near the entrance which had shown a strong, hard surface) and B (the middle of the eastern wall which looked a more natural surface).  A 2m x 2m trench was put in both locations.

Trench A had very little in the way of turf.  The spades came down immediately onto a modern gravel layer.  Under this layer was a plastic layer.  It was supposed that this was put down in 1985 as a way of protecting the underlying surface.  The plastic was badly degraded.  Under the plastic layer was a harder, mainly soil surface over a broken sandstone, gravel layer.  Below this was the natural, clay surface.

Trench B had a similar structure but turf had to be removed in order to get to the modern gravel - this probably accounted for the differences shown on the geophys.  Underneath this layer was the same, degraded plastic.  The soil layer was slightly deeper than that found in trench A but came down onto the same sandstone, gravel layer.  All the other features were as in trench A.

At some, comparatively recent date (probably 1985) the stone structure had been stabilized with concrete pointing.  By going closer to the wall and looking at the foundations the earliest, bonding structure could be discovered.  At around 20cm the foundation cut appeared.  This was followed down to the base of the wall at around 25cm.  The lower two stones (under the normal surface layer) were also bonded with an earlier and different mortar.

In both trenches any finds came from the soil layer between the plastic and the clay surface.  There was abundant broken glass, mainly from bottles.  The main identifiable feature being codd-necked bottles (complete with glass marble) which, having been patented in 1872, must have been deposited after that date.  Reconstructed examples are also shown.

Some glass was found with the word "Seed" embossed on it. 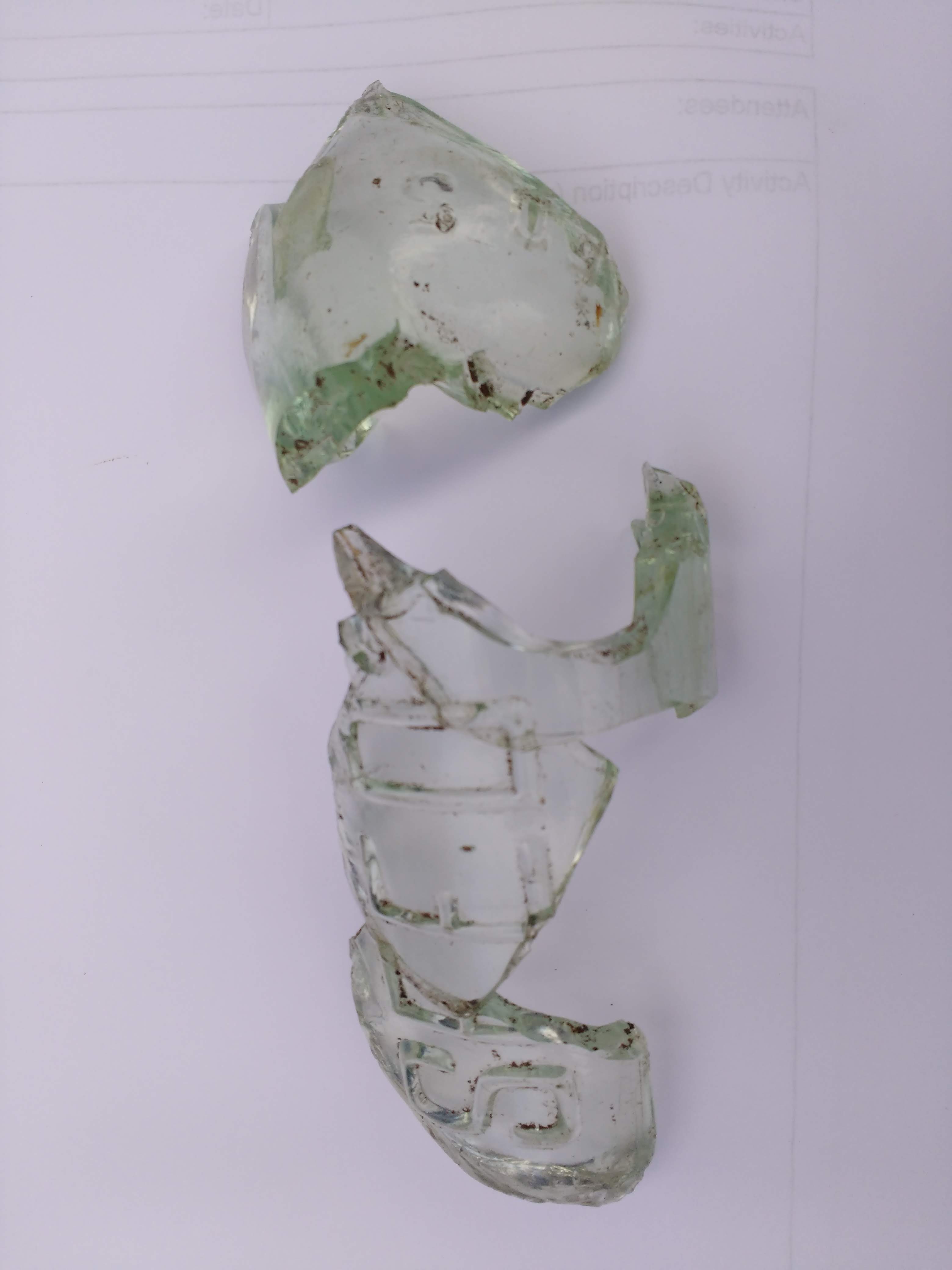 Large sections of treacle-ware vessels were found in all areas - but mainly against the eastern wall. 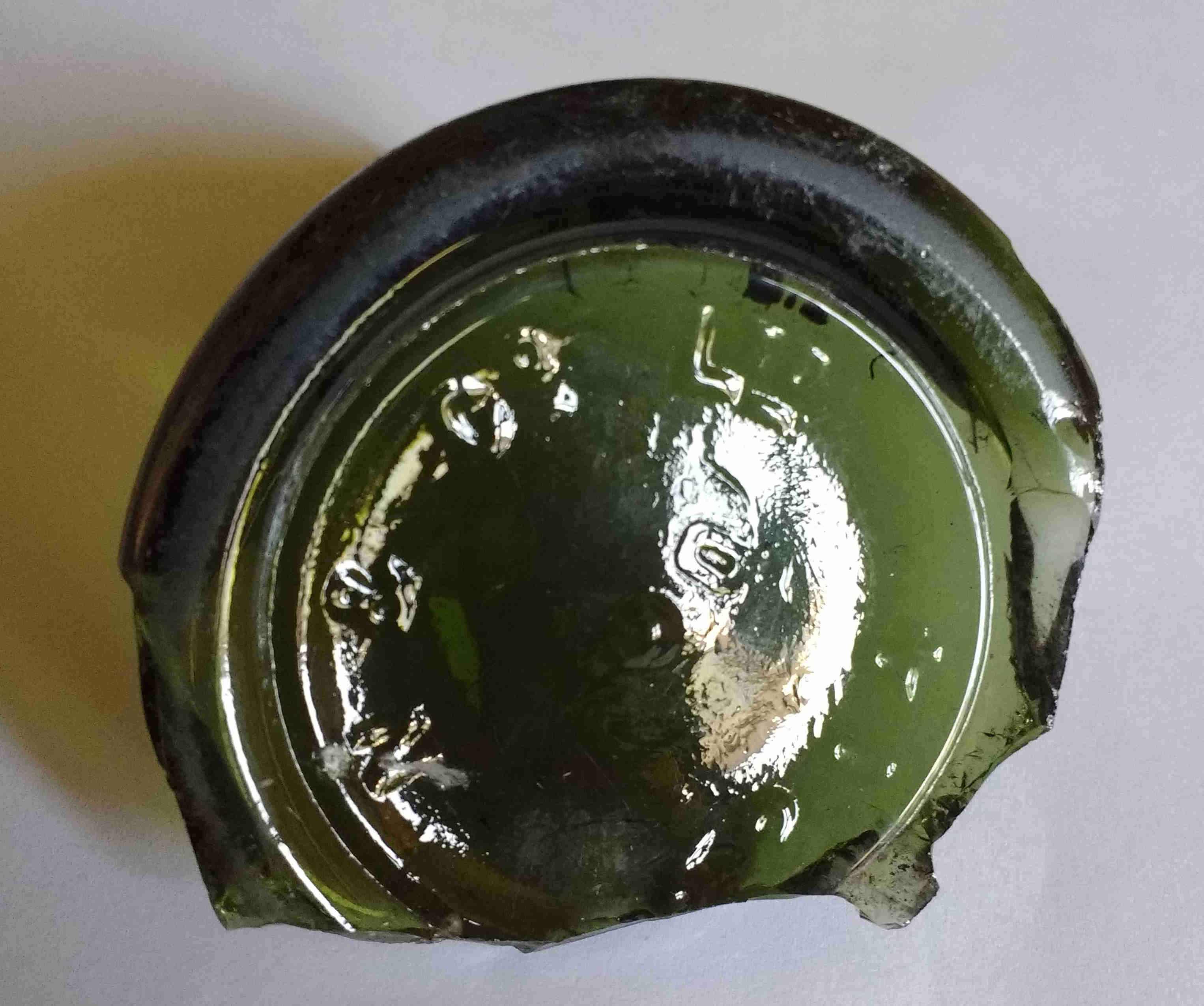 One of the more datable items was the base of a glass bottle.  Looking at a number of antique bottle collectors sites the embossed letter "N & Co Ltd" was produced by the Nuttall & Co from around 1900 onwards.

The pinfold appears (without being named) on the OS 6 inch map which was revised in 1910 and published in 1913.  The earlier edition; surveyed in 1892 and published in 1895 fails to show the pinfold in the present position.  This would tie in with the all of the finds being post 1872.  It doesn't appear that the walls were ever "dry-stoned" as the mortared stones in the foundations dispels this idea.  The mortar in the visible layers (and possibly the plastic sheeting) was more than likely added in 1985 when a portion of the fold needed renovating.

The question that needs to be asked revolves around there being no pre-Victorian finds.  The earliest, detailed maps that show a pinfold are the tithe map for 1839. 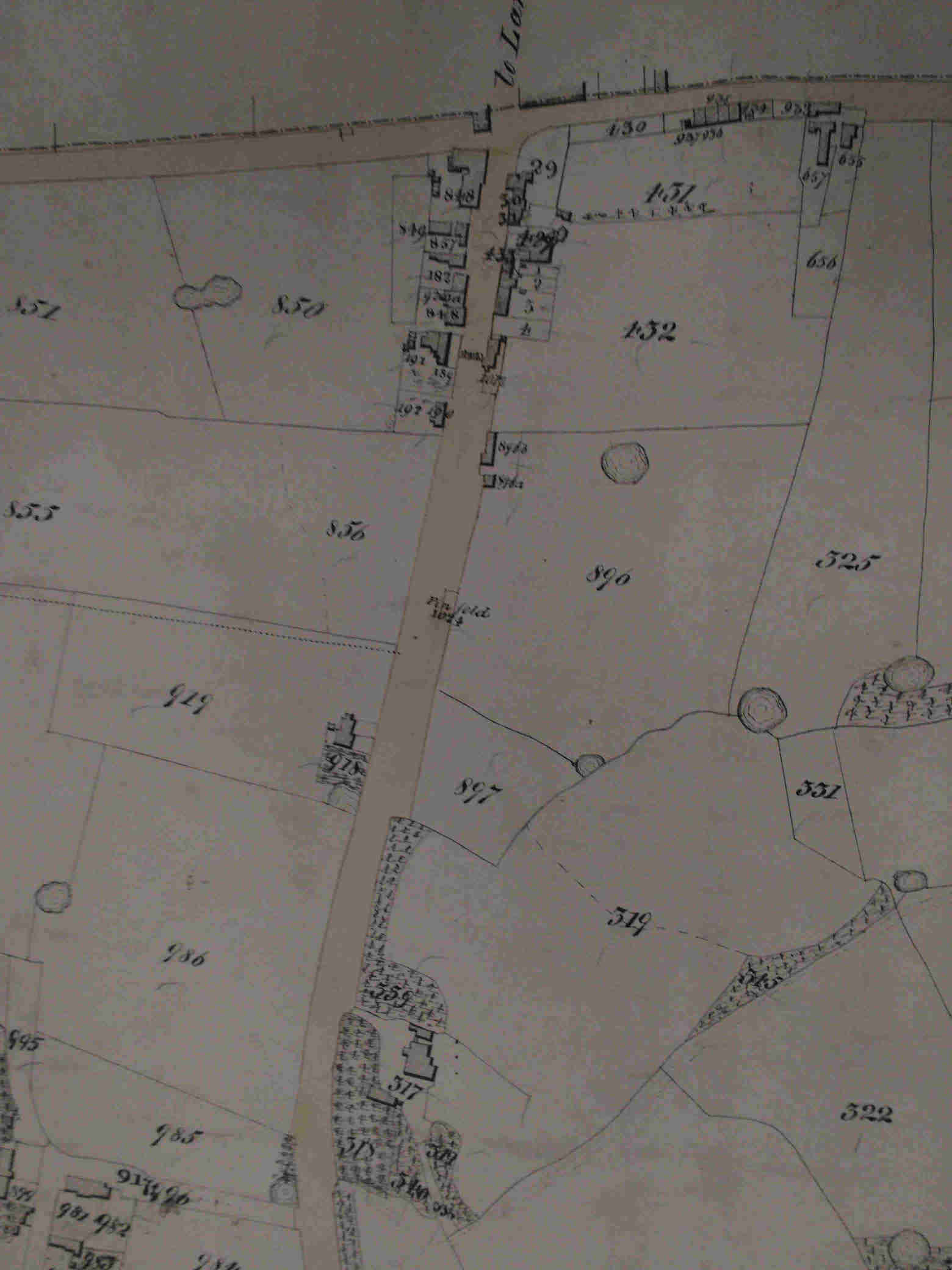 From this map the pinfold is obviously jutting out into the road.  The field to the right was known as pinfold field (896) with the further pinfold field (897) being to the south of this.  The present pinfold being situated on the southern edge of this field. 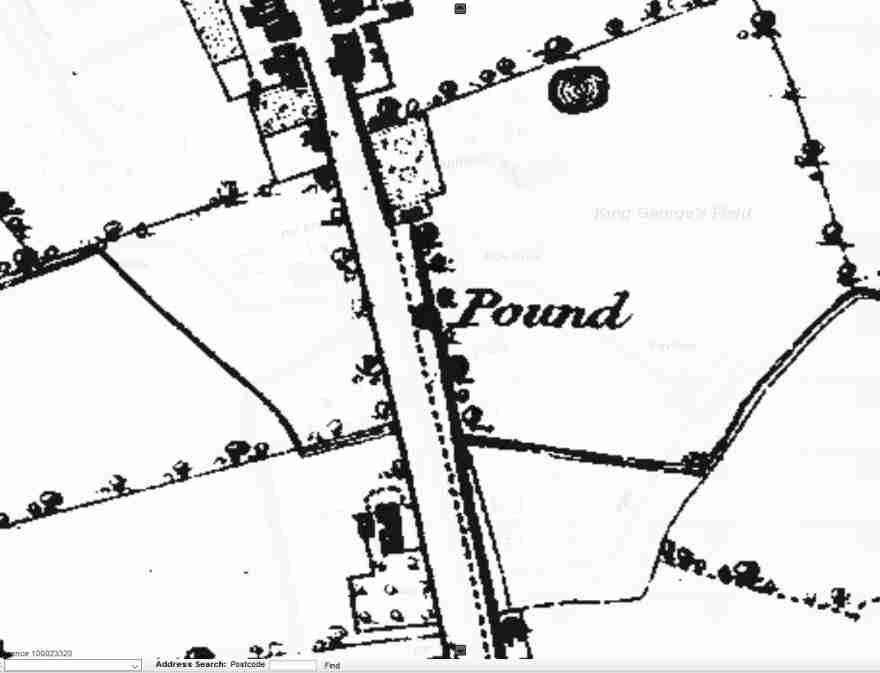 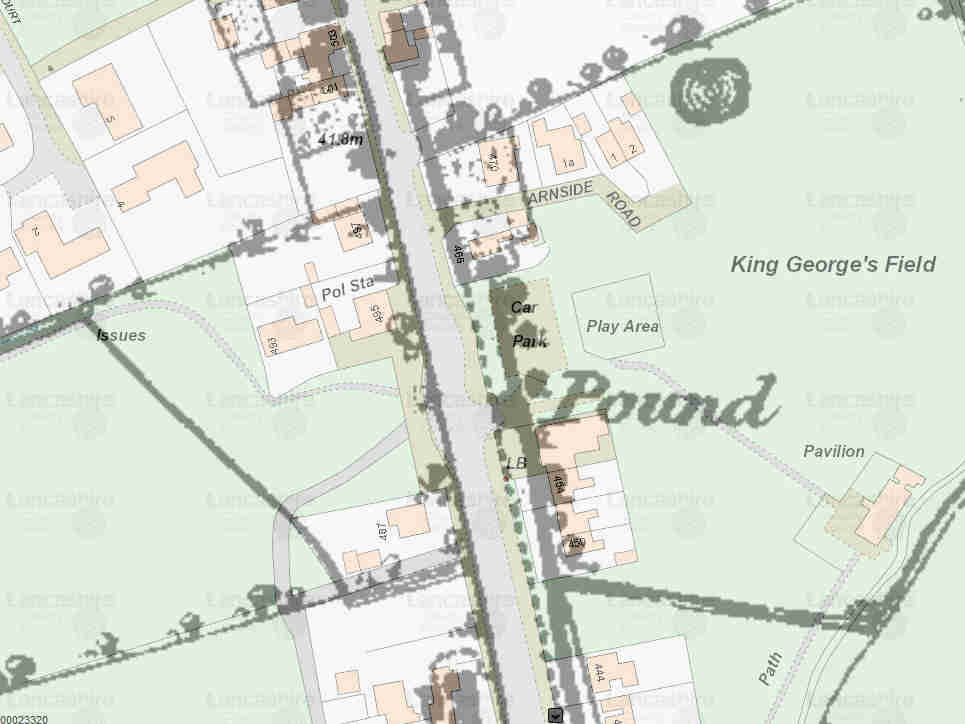 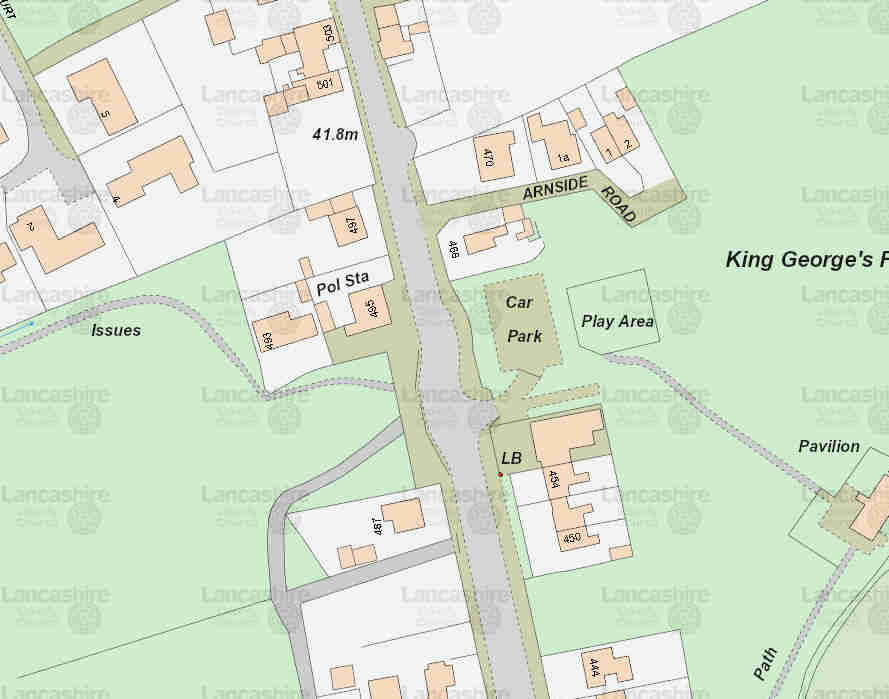 The above maps show the 6 inch OS map surveyed in 1844 and published in 1847 together with the modern map and a merged version of these maps.  Both of these maps show the pinfold closer to Broughton crossroads - near the entrance to car park.  It is presumed, without having access to any other records, that the original pinfold had to be moved when the road was widened.  The obvious place being around 150m to the south.